Simpler, cheaper, faster: the case for TSN in factory automation networks grows stronger by the day

Read this to find out about:

Today, the installed base of networking technologies for factory automation remains dominated by familiar protocols such as Profinet, EtherCAT®, Modbus-TCP and Ethernet/IP, shown in Figure 1. A newer technology, Time-Sensitive Networking, or TSN, has only a small foothold in the industrial sector. But while it is true that technological change occurs at a slower pace in the industrial sector than in consumer electronics, there is no doubt that change is coming.

The adoption of TSN in factory automation networks is now being driven by the strong financial and operational benefits which it offers. In fact, this trend is not restricted to the factory: in cars, trains, buildings and elsewhere, TSN is beginning to take its place as the backbone of all-Ethernet communication.

And as this article will show, the emergence of a comprehensive set of product options for OEMs to choose from when building TSN network interface cards (NICs) and TSN-compatible equipment enables them to meet a wide variety of circuit design requirements. 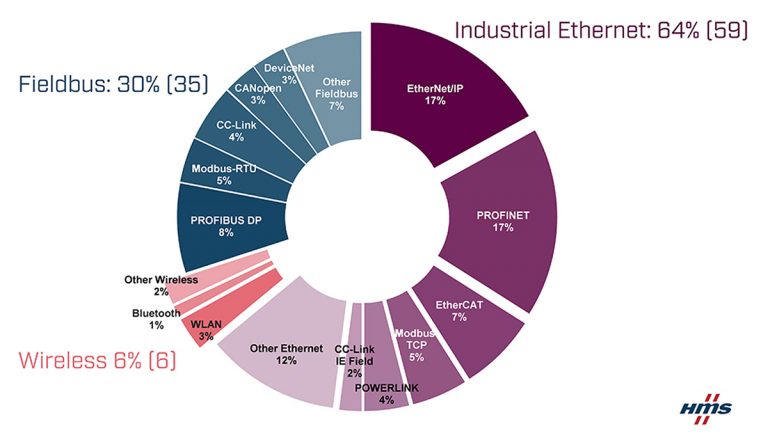 Fig. 1: Share of market for new factory networking installations in 2020 according to research by HMS Networks. (Image credit: HMS Networks, at hms-networks.com.)

Factors driving the move to TSN

The momentum gathering behind the move to TSN in the factory has in fact been growing for many years. The concept of mirroring the familiar Ethernet protocol, a universal feature of wired office networks since the 1990s, in the industrial or automotive environments was first formally declared in 2009 with the founding of the AVNU Alliance, backed by some of the biggest names in industrial and automotive networking technology, including Cisco, Intel, Bosch, General Electric, BMW, General Motors, NXP Semiconductors and Renesas.

This grouping took on the task of developing a robust version of Ethernet called Audio-Video Bridging (AVB). The AVB Task Group formed in 2011 had the goal of developing an Ethernet-based protocol suitable for connecting automotive infotainment devices such as video cameras and displays.

The AVNU Alliance then extended its work to cover factory automation, the term time-sensitive networking emerged in 2012. Under the auspices of the IEEE, the AVNU Alliance set out to develop a set of standards which would define the additional features of a TSN network for operational technology (OT) applications. The standard TSN protocol was to be built on top of the basic Ethernet protocol implemented in information technology (IT) settings. The benefit which the promoters of the TSN standard promised was a combination of simplification, cost reduction and performance improvement.

Today, factories are plagued by:

The multitude of networking standards inside the factory also isolates different sets of equipment into networked silos: equipment in one silo is hidden from equipment in another silo. This hinders the integration of equipment across a factory automation system. There is a similar lack of transparency between OT and IT systems.

TSN provides a way to eliminate all of these problems. In a factory system, it can operate as the carrier for traffic generated by fieldbus and industrial Ethernet protocols. In terms of the Open Systems Interconnection (OSI) model, TSN is a Layer 2 networking technology.

Ethernet products supporting TSN also offer higher data-transfer rates of 100 Mbits/s or higher, while most of today’s industrial Ethernet networks and other connected services in the factory operate at data rates of 100 Mbits/s or less. This means that the implementation of TSN technology allows the operator to integrate multiple services on a single Ethernet medium, shown in Figure 2. 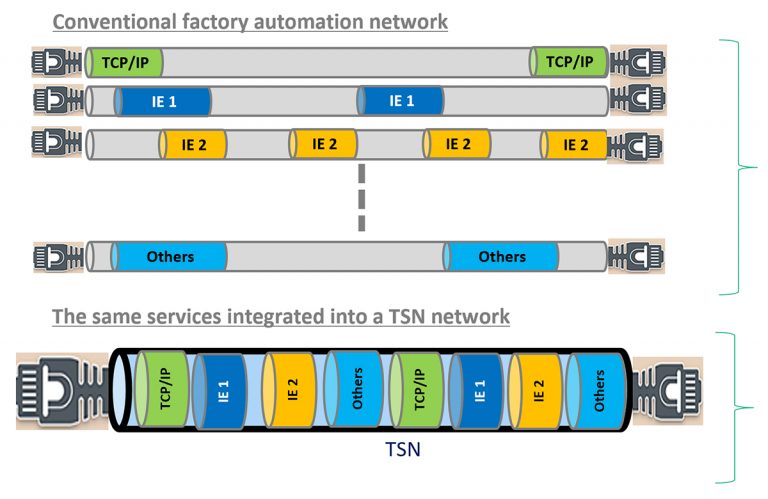 So TSN can address the problems arising from the proliferation of industrial networking technologies:

The simplification of the network also contributes to the provision of security, an indispensable condition for the adoption of Industry 4.0 technology. Before TSN, the OT system might consist of multiple network segments, the security of each of which has to be managed discretely. This puts an increased burden on the IT department, and increases the risk of security vulnerability.

With TSN, VLAN technology enables the operator to run multiple different network services virtually within a single, integrated Ethernet topology. This means that security procedures only need to be applied to TSN nodes instead of to heterogeneous network nodes: this simplifies security management on the IT side and thus reduces the risk of leaving the network vulnerable.

The key features of the TSN protocol

The work started by the AVNU Alliance in 2011 has ended with a robust protocol codified in various IEEE standards. These standards cover the following main operating features of the network:

The standards sit on top of the basic IEEE 802.3 Ethernet standard, ensuring that the service levels of the various network protocols are maintained after their integration into TSN, shown in Figure 3.

Fig. 3: The additional standards on top of the legacy Ethernet standard which form the TSN protocol

A fully-formed ecosystem of TSN components and modules

Equipment designers who implement TSN in industrial equipment have a choice of discrete versions of the key components of TSN network equipment, the transceiver and the switch, and of system-on-chip (SoC) versions.

Typical examples of discrete TSN transceivers are the Microchip LAN9668, a TSN switch. It may be combined with the LAN8814, a Layer 1 (physical layer) product launched in January 2022 which provides up to eight Ethernet ports in a single device.

The SoC versions include an on-chip processor to run the TSN protocol and perform network control functions, as well as to support the application. Examples of TSN transceiver SoCs include:

While the above examples are transceiver SoCs supporting TSN, there are also TSN switch SoCs:

SoC versions offer the advantage of a simpler hardware layout with a reduced component count, and thus less development time and potentially a lower bill-of-materials cost.

These TSN products, both the discrete and SoC versions, are backed by comprehensive software and tools offerings to support the development of a complete TSN application.

While the SoC versions provide for a simpler hardware layout than the discrete equivalents, they still present the designer with integration challenges, including the provision of DRAM memory and a power management system. To ease implementation and reduce time-to-market, a system-on-module (SOM) which carries a SoC version of the TSN components is a viable option. The SOM option would also be helpful for manufacturers which have limited hardware development resources and time. SOM products from Karo Electronics and iWave are available from Future Electronics, and they support transceiver SoCs such as the i.MX 8MPlus.

The ecosystem of TSN components is also supported by widely available portfolios of the passive and connector products required to implement a TSN or Ethernet design, all available from Future Electronics:

The wide choice of products described above shows that implementation of TSN in factory automation equipment is supported by a mature component ecosystem. In addition, many designers of networked industrial equipment who are familiar with the legacy fieldbus and industrial Ethernet protocols can carry over many of their development assets to TSN.

Nevertheless, it is still fair to say that the migration to a TSN-based network architecture requires the designer to learn and adapt to the new technology. This includes the need to configure features of TSN to support an entire network. Future Electronics is ready to support design engineers in the transition, providing guidance on network implementation and component selection through local and regional specialists in networking and embedded computing.

Future Electronics thanks Kenji Iijima, Martin Schiel, Joshua Schlotmann, and Björn Thiem for their help in the preparation of this article.